In the midst of the chaos of living in Paris, a couple of weeks ago I had the blessing of being introduced by the lovely Paz Reina to a short film, named “The Beatles Cathedral Gallery”, a movie made by the spiritual artist  Pan Trinity Das,   which has brought freshness, peace and hope to my mind.

I don’t usually talk about things that I haven´t experienced in person and seen with my own eyes, but in this case even with extreme distances between France, where I am based, India where the movie was recorded and Canada where Pan lives, it was impossible not to be touched  by this wonderful art creation developed by a creative global community.

After watching the movie several times, and being absorbed in its’ really special soundtrack, Paz (who has been traveling for 7 months with the mission to spread peace and smiles all over the word) introduced me to this other special being, named Pan. We had a long conversation over skype and once more, the universe showed me how great intentions and spontaneity can create extraordinary things.

Pan is a 26 year-old artist who lives in Toronto, and considers himself a spiritual “rainbow”. He has struggled to find space to show his work in the traditional galleries because his art is considered “too spiritual”. Recently, he was influenced by the movie Exit Through the Gift Shop, especially by the work of the artists Shepard Fairey, Banksy and Barbara kruger. “ I started painting when I was 16. I did a lot of shows in coffee shops and my mom pushed me a lot to try and sell. I did my first graffiti project when I was 19, I painted a massive wall under a bridge with positive messages.”

A practitioner for 7 years of Bhakti Yoga , which means yoga of devotion, Pan had been encouraged by many friends to spend some time in the East/India. In the beginning of this year he travelled to India, and miraculous things started happening. “I was really captivated by what happens in India. In the beginning, I was just traveling and taking photos, I didn’t have plans to make the movie yet, it just happened afterwards”, he explained.

While living and performing seva (selfless service) at Amma’s ashram, he noticed that there were some paintings on the walls. “When I saw those paintings, I thought I could do something myself, so I talked to the supervisors and they were really interested in what I do. They gave me a space in a pool area and when I started to paint, magical things started happening.” In the first 2 days, he was allowed to paint 1 hour a day, which was not enough to get much work done. “After the second day, miraculously the pool filter broke, so they had to shout down the entire area and suddenly I had all day to paint and I thought,  “This is Amma’s grace.” 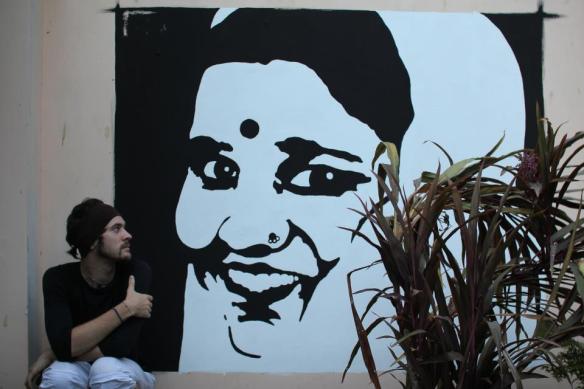 Pan and his Amma mural at Amritapuri

After this beautiful experience he decided to make street art in all the cities that he would visit in India, “That became my goal”, he said. After 3 months, Pan had painted in half the cities and villages he had visited, feeling disappointed that he hadn’t found suitable walls in the North, he headed to Rishikesh after a friend suggested there were walls down on the Ganges. Once he got there, he was directed by a musician named Parker Ainsworth to the abandoned Maharishi Mahesh Yogi Ashram, popularly dubbed the “Beatles Ashram.” The site where, in 1968, The Beatles composed the “White album” while seeking sanctuary from the lime light.

The Beatles and the Guru Maharishi Mahesh Yogi in INDIA

“There I met some musicians who were interested in shooting a music video covering Beatles songs from the White album.  With my friend Ian Ether who is also an artist and a co-visionary of this project, I did a portrait of the Beatles for the visuals of video”.

The Beatles painted by Pan Trinity Das and  Ian Ether

Once finished , Pan realized that The Beatles cover looked too small for the cathedral space and a vision emerged of transforming the entire hall into a gallery : “I was blown away with the potential of that place… there was no reason to stop painting. I had one more month in India,  so I decided to clear my schedule and stay there”.

Each day  20 or 30 tourists and musicians came to visit the Satsang Hall. The affirmation of Pan’s visions came on the third day, when around 15 volunteers from all over the world came to help with the gallery, rapidly transforming the Hall and unifying the community.  The number of volunteers multiplied each day as artists, musicians and people who thought they could never paint were there working together as a community “full of compassion”, as one of the volunteers describes.

Since it’s impossible to find spray cans in India, the whole gallery was painted in oil paint which Pan supplied,  entirely in black, red and white.  At the end of 2 weeks, when the gallery was shut down by the authorities,  Pan had painted 10 portraits  of spiritual figures, besides the work of 4 other artists; Ian Ether from USA, Freja Fri from Denmark, Lorwen De La Foret from France, Alice & Julie Jensen from Denmark and over 50 volunteers from all over the world. 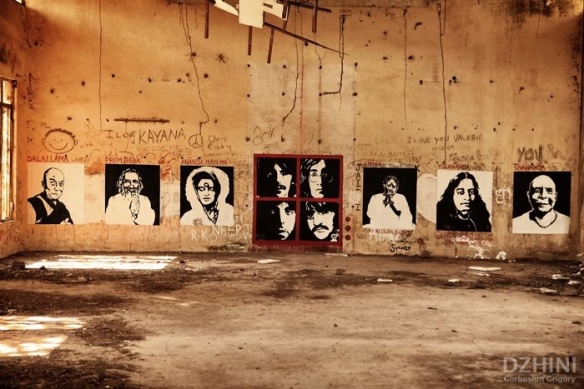 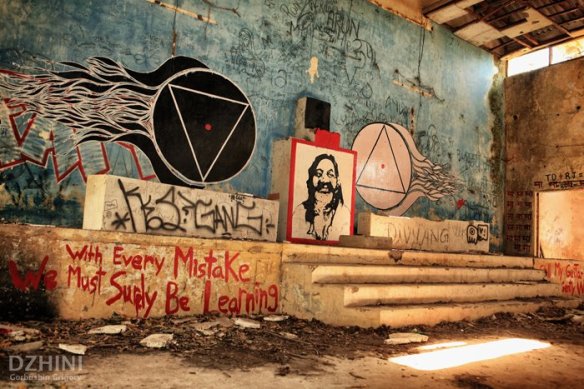 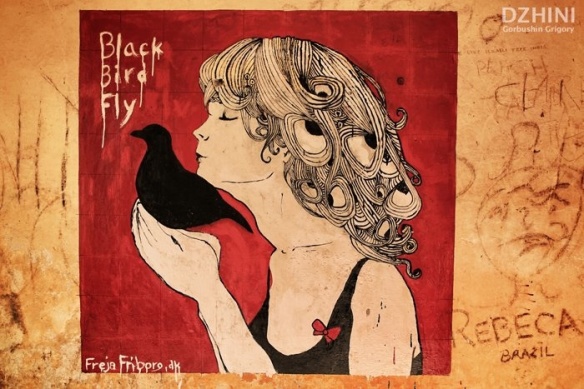 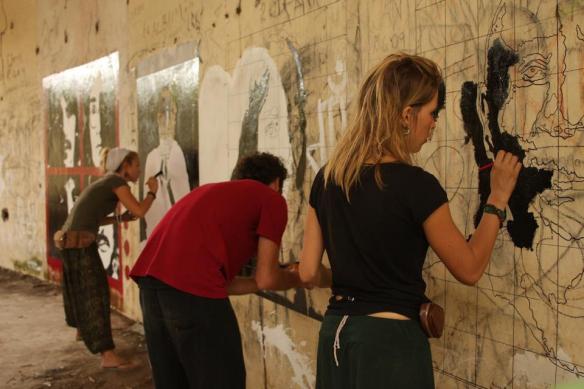 Artists, volunteers and Pan on top at Satsanga Hall

Now, 2 months after returning to Canada, Pan continues to receive photos and letters from fans of The Beatles Cathedral Gallery. ¨On one of the walls, we wrote the Facebook page address  and now people send us their photos. I still feel so connected with the place, I left a legacy there”, he said.

The movie came afterwards as a way to share the project. It´s Pan´s first movie and he says he´ll continue to make them.  “It’s a great medium to share with the world everyone including my family.”

Planning to go back to India next January, Pan described it to me as “the most amazing place I have ever been to”.  “I’m going back to see my baby”” he says.

Currently in Toronto, Pan just had a show in one of the most prominent Yoga centers in the city, and for that he created over 170 pieces of art in a month, and sold them at affordable prices, because “most people who support me are my friends, and some of them don´t have a lot of money.”

“Yoga changes the spiritual mentality of the whole world. It is a revolution in lifestyle and this should be represented in art. That’s how art works; we document what is happening in culture all over the world. That’s why I’m doing it, it’s a part of me. This is my political message, the message of love”. he says.

Having seen the movie and photos of this project and talked to Pan“in person”, I found in his art and in his movie the perfect connection between street art and spirituality, which fulfilled my own soul´s need for such balance. I hope to see Pan’s work on a Wall in Paris very soon.

To finish this very special article, I chose some amazing words that you can hear and see at the end of the video as part of the testimony of people who were lucky to be there and participate in the project: get inspired!

“ SPACE OF PURE POTENTIAL!”  “PLACE ABOUT COMMUNITY AND PEOPLE COMING TOGETHER”     “IT’S GLORIOUS!”       “FENOMENAL ENERGY, FULL OF COMPASSION!”  “POWER FOR THE FUTURE!”   “ABSOLUTELY MAGICAL PLACE!”     “A PLACE THAT HELPS YOU BE MORE CREATIVE”

For the inauguration of the second Le M.U.R wall in Paris at the thirteen arrondissement, the association invited the Belgian artist BONOM to do a live performance last Wednesday in front of the Senna River.

As I’ve written here before, the famous Le M.U.R  at Rue Oberkampf  has been presenting live artistic performances every 15 days, promoting urban art since 2007. Le M.U.R  (which stands for modulable, urbain, reactif) is an association that invites street artists providing gallery exhibition conditions on the streets.

The Mayor of the 13e, Jerome Coumet, is really engaged in promoting culture in this area. With a lot of expressive national and international works from artists as Shepard Fairey, C215, Vilhs, Jana & Js and Inti, the arrondissement has been transforming into an open sky museum for street art, specially now, after the opening of the second wall of the dynamic Le Mur.

I was there, expecting to watch Bonom draw an animal, a subject that he draws very often and is really impressive to see around the city.

But for this performance he drew a woman, a beautiful naked woman, which, I’m guessing, could be a nice tribute for his girlfriend who was there.

I quickly asked him only one question: Why did you decide to paint a woman instead of an animal? He replied: “ Why shouldn’t I paint a woman? It’s so motivating!”

With a raw technique, he used spraypaint only in the beginning to add some colors and the first traces of the drawing. After that he painted with a roll in a rustic and rushed way. 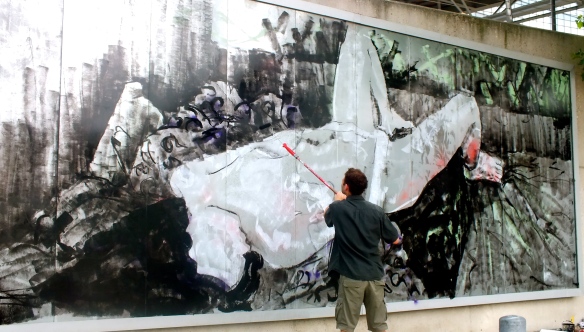 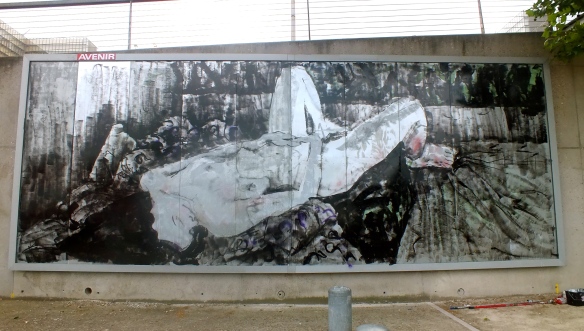